Coastal Karnataka has a long historical and cultural tradition.  Situated on the West Coast, it has attracted many foreign traders from Europe, the Middle East and even Israel for centuries.  Mangalore was under Portugese for sometime and later under Tippu Sulthan until the British defeated him.  The stamp of various cultures is evident along this coast.  There has since been a dilution in the original culture over the years.

However, in the villages a rich local culture aligned to religion and the temple is still very evident. 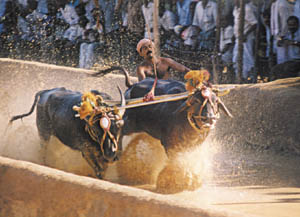 The Buffalo Race is one of the oldest sports in this region.  This event is the highlight of a major festival organized by the villagers.  It take place on a muddy track adjoining a rice field. 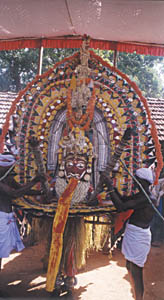 The Bootha Kola cult is practiced in the Dakshina Kannada district.  It is a complex system of beliefs and rituals harmoniously blending with dances and dialogue set to music.  It is believed that this cult has been in vogue for well over 2000 years.  The narrative songs called Parthanas describe the origin of the sprit.  Over 400 sprits are worshipped in this region.  People seek the solution through the priest (who is supposed to be possessed) for their problems.

Another form of spirit worship to be witnessed is when the Priest falls into trance and is believed to be possessed by a spirit.  The crowd around him too then falls into a trance and is similarly possessed.  Mostly each member of this crowd should have earlier taken a vow to faithfully attend this annual festival. 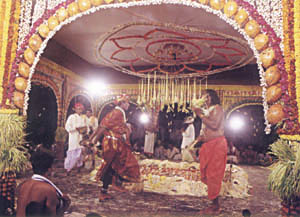 Naga - the serpent has a very special place in Hindu Mythology.  During the ritual, every visitor hosted to lunch or dinner.  The costume of the priest and the decor add color to his unique dance.

It is a popular belief that any wrong against the Naga will bring retribution not only to the wrong doer but also to his descendants for several generations.

This is an annual temple festival held at mid night after the car festival in the month of March or April.  Around 300 participants first accept the "Prasadam" (A sanctified food offering blessed by the idol) and form themselves into two groups.  They then hurl flaming torches at each other.  Flames in a sea of sparks light up the darkness around.  The participants are unscathed. 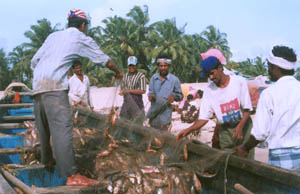 This is another temple event.  People gather at the river and try their hand at fishing using ingenious tricks and devices to land their catch.

DEEPA means a lamp.  During this festival, the temple and its precincts are ablaze with the light from over myriad flames from tiny clay lamps with wicks in oil.  In the modern days, the electric bulbs are replacing the fire lit lamps. 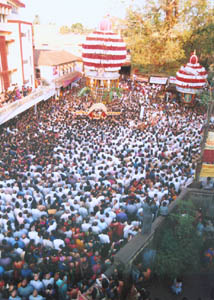 The whole town is out to celebrate this annual festival.  People during this colorful celebration pull the bedecked temple car.  The whole town will be decorated.  This is very colorful festival.

Sri Krishna temple was founded by Shri Jagadguru Madwacharya, 700 years ago.  This temple complex consists of 8 Mutts - Kaniyoor, Sode, Puttige, Admar, Pejavara, Palimar, Krishnapura & Shiroor.  Each Mutt is headed by "Swamiji" (Saint).  The right of worshipping of Lord Sri Krishna will be transferred from one swamiji to another swamiji for every 2 years (among the 8 swamijis of 8 mutts).  This celebration is called "Paryaya" and is held on 17th January night.